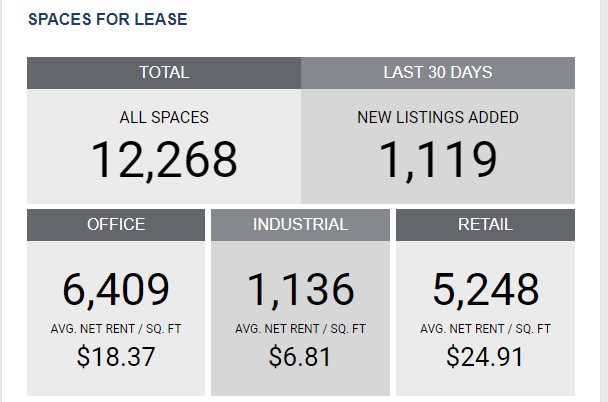 These insights are made possible through CoStar, the largest commercial real estate source for property listings for sale or lease in Canada.

The overall Canadian economy has slowed compared to previous years, however, the Greater Toronto Area (GTA) economic underpinnings remain solid, with GDP and employment growth expected to perform at or above the national averages, at 1.9% and 3.0% versus 2.0% and 1.2%, respectively. The GTA economy continues to show strength, despite increasing interest rates and government policies designed to slow the housing markets, in the form of stricter mortgage qualification rules and foreign investor taxes. These measures did impact the residential real estate sector in the first half of 2018, and therefore it was no surprise to see the Finance, Insurance and Real Estate (FIRE) sector, which accounts for 29% of the GTA’s economic output, shed some jobs. Any extended housing market slump would have had an impact on this sector, and the GTA office market which is home to the head offices of all of Canada’s big 5 banks, however, the GTA residential real estate market has stabilized, with average sale prices and volumes increasing once again.

The GTA, and Southern Ontario, are the epicenter of Canada’s manufacturing sector, which currently accounts for 11.5% of the GTA’s economic output. The importance of this sector in the GTA has diminished over the years, falling from 18% in 2002 when the Canadian dollar was worth approximately USD$0.60, and the decline in manufacturing is partially due to this long term rise of the Canadian dollar and the high cost of energy in the Province of Ontario. It should be noted that the GTA industrial vacancy rate is one of the lowest in North America, and is also the primary choice for logistics operations in Canada, with the transportation and warehousing sector accounting for 3.8% of the GTA’s economic output. However, the manufacturing sector, and the industrial real estate that this sector occupies, will bear the brunt of any failure to renegotiate NAFTA and any further tariffs on Canada that the Trump administration is contemplating. Furthermore, the contagion to other sectors will impact retail sales and logistics at a time where high consumer debt and inflation are already weighing down retail sales.

Given this economic backdrop, the office, industrial and retail commercial real estate markets in the GTA continue to perform well and remain well within “landlord” market status. The office market vacancy rate has decreased by 20 basis points (bps) year-over-year to end August 2018 at 6.1%, with the average net asking rental rate up 0.7% over the same period, to $18.37/sq. ft. per annum. With exceptionally strong demand driving down vacancy and pushing net asking rents up, it is no surprise that landlords and developers are confident about the future performance of the GTA office market. As such, construction activity continues to increase. There is currently 7.3 million SF of office space under construction in the GTA, with an additional 2.9 million SF expected to break ground imminently, consisting of: Cadillac Fairview’s 160 Front St. W., at 1.26 million SF; Brookfield’s Bay Adelaide Centre North, at 820,000 SF; Carttera’s 65 King St. E, at 400,000 SF and Menkes’ Waterfront Innovation Centre, at 400,000 SF. All in, and not including other proposed projects that are rumoured to be getting closer going ahead, there will be over 10.1 million SF will be under construction, representing 3.8% of existing inventory. These projects account for 8.2 million SF downtown, and represent 8.7% of the existing downtown inventory. The extent of this construction activity is indicative of the confidence these developers have in the future of the downtown market. Downtown vacancy remains tight, and although it is up slightly from mid-year, by 30 bps, it remains down 50 bps year-over-year at 3.5% in August 2018, whereas the suburban vacancy rate is unchanged year-over-year at 7.7%, but down 10 bps from mid-year. With demand remaining strong, and new supply limited in the short term, expect rental rates to continue edging up.

The industrial market experienced a 100 bps drop in vacancy year-over year to end August 2018 at 2.2%. As a result of strong demand and limited supply, the average net asking rental rate continues to increase, up 9.0% year-over-year, to $6.81/sq. ft. per annum. Low vacancy rates and continued demand from transportation and warehousing users as well as non-traditional users such as cannabis grow operations is driving increased construction activity. There was 6.6 million SF under construction at the end of August 2018, however, this only equates to 0.8% of the current market inventory. Furthermore, in 2017 there was 8.7 million SF of new supply, and year-to-date in 2018 the GTA has only had 1.8 million SF of new supply delivered. As a result, expect vacancy to remain low and rental rates to continue rising. Despite the exit of Sears and somewhat weak retail sales this year, the retail vacancy rate has edged down by 20 bps year-over-year to 2.9%, however, the average net asking rental rate is also down, by 2.0% year-over-year, to end August 2018 at $24.91/sq. ft. per annum.